When you have a mature business dialed in–especially a restaurant–the notion of making substantive changes can be tough to swallow.  Make a mistake and you risk alienating customers who have no shortage of options.

The only bigger mistake is to do nothing at all, continuing on a predictable path that can encourage previously rabid fans to go elsewhere in pursuit of new and exciting culinary opportunities.  At the same time, making changes can alienate people who become incensed when their favorite entrée disappears from the menu.

Over our nearly 15 years in business, we’ve maintained a philosophy of continuous, incremental change.  But after a decade of operating a fine dining restaurant, we’re amping up the pace and breadth of change.

It started at the end of June when we ended the 5+-year run of our very successful, monthly prix-fixe series.  After some serious analysis of our operations and the restaurant market, we concluded enough was enough.  Throughout the summer, we’ve explored options and taken stock of our internal resources to reimagine our approach. . .starting with our menus.

Beginning last week with a soft launch, our new menu design has been simplified for easier navigation of three new sections.  Here are the major changes developed by Chef Eric Alexander that we hope you will view as substantial improvements; check out details by clicking here.

1.  Previously separate bar and dinner menus have been replaced with a single, one-page menu.  You can order anything on the menu in either the bar or the dining rooms. 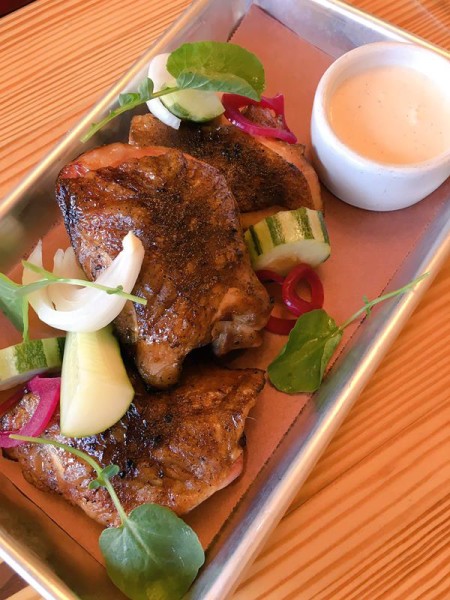 2.  Introducing. . .we’re bringing in an entirely new segment:  “Smoked Specialties” prepared by our in-house pitmaster, the very talented Spencer Smith (see his profile below).  Three tangy selections are presented daily: out of the box Spencer is preparing St. Louis Spareribs with his proprietary “Shred Sauce;” Beef Shortrib Pastrami; and Organic Chicken Thighs.  We’re biased of course, but this dude is masterful.

3.  Introducing. . .a selection of five Sides that you can share; some can double as appetizers at the table or at the bar.  The Potato Purée with bone marrow butter is to die for.

4.  Introducing. . .”CV Classics,” the most popular dishes served over the last decade, focusing on seasonal specialties.  Favorites such as steamed mussels, popcorn and chicken liver mousse are among the items currently available.

The heart of Chef Alexander’s menu–Starters and Entrées–are featured prominently.  The menu will change seasonally and we’ll always appeal to diners with special vegetarian and vegan preferences.

We’ve also overhauled our Wine Service with what we think are substantial improvements, starting with all wine and beer selections are presented on a single page for easier navigation:

1.  The $5 “Restaurant Service Charge” to open a bottle purchased in the retail wine shop is eliminated.  Too many folks simply did not understand the reason for this charge, so it’s gone.

3.  Pricing of wines featured on our “Restaurant Kindle List” start at $29.95 per bottle.  All wines are still priced at retail, with no “restaurant” mark-ups, representing an exception fine dining value.

We hope you enjoy and approve of what we’ve done.  We welcome your thoughts.