***MEMBER PRICE WILL NOT SHOW ON WEBSITE and/or ORDER.  DISCOUNT WILL BE GIVEN WHEN TRANSACTION COMPLETED BY CV STAFF ASSOCIATE.*** 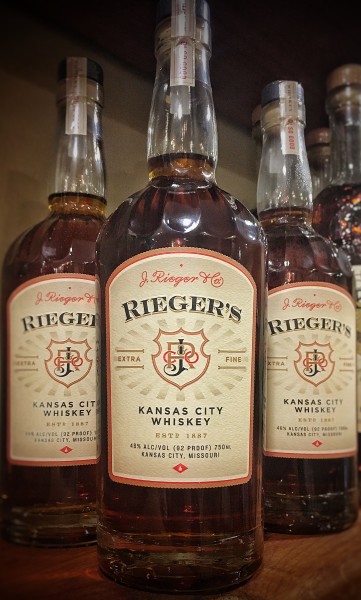 Jacob Rieger, founded J.Rieger & Co. in 1887 in Kansas City’s West Bottomsneighborhood.  The neighborhood sits on the Missouri/Kansas state line and since Kansas enacted statewide Prohibition in 1881 (39 years before Federal Prohibition), the area was home to many saloons, brothels, casinos, liquor retailers, etc. that were patronized by residents from both sides of the state line. Because of all the booze that flowed there, the area became known as the “Wettest Block in the World.”

Alexander Rieger, Jacob’s son took over the helm in the early 1900’s and that is when the business really took off.  Basically, Alexander started the largest mail-order whiskey house in the country with over 250,000+ subscribers, having access to 100’s of products including: gin, rum, stomach bitters and tchotchkes.  Folks would fill out their order form at their home, place it in an envelope with the amount of money due, and mail it to J. Rieger & Co who would then fulfill the orders and ship liquor all over the country.  OH, HOW THINGS HAVE CHANGED!

Forced to shut down and close the distillery on January 1, 1920 (THE BIG “P” word), Alexander Rieger and his son Nathan opened a bank named the Home Trust Co. in Kansas City.  This would be the “new” endeavor the family would run well into the 1980’s when consequently, Andy Rieger, the great-great-great grandson of Jacob Rieger would be born.

OKAY – a lot more does happen, and I suggest you read about it for yourself (click here), but this email is starting to get long-winded.  Fast forward to 2010, Andy Rieger meets Ryan Maybee whom had just opened a restaurant in the historic “Rieger Hotel” building (yeah, they owned that too).  Over the next FOUR YEARS they work together to finally release their first traditional “Kansas City” whiskey in 2014.  To say they have been successful would be understatement.  Right out of the gates, they were named in the Top 4 for International Best New Spirit or Cocktail Ingredient at the 2015 Tales of the Cocktail Spirited Awards.  With all this success, they are slated to open their new home in June, which is a 60,000 square foot distillery located in the former HEIM Brewery bottling house.  Check out the website for this too!

So How Does It Taste?

How To Drink – “Our Kansas City Whiskey is a blend of Straight Bourbon Whiskey, Light Corn Whiskey, and Straight Rye Whiskey, all aged at least 4 years, as well as a small amount of 15 year old Oloroso Sherry from the Williams & Humbert Bodega in Jerez. Bottled at 92 proof, Kansas City Whiskey is well-balanced, smooth, and slightly sweet. It’s beautiful when served neat or on the rocks, but also works well in classic Bourbon – or Rye-based cocktails such as the Horsefeather, Manhattan and Old Fashioned.”

Special Process – “We source, sample and test dozens of whiskey distillations to find the components of our Kansas City Whiskey blend. Three different styles of whiskey, Straight Rye, Light Corn Whiskey and Straight Bourbon are selected and aged separately. From Jerez, Spain we import a 15 year old Oloroso Sherry from the William & Humbert Bodega. We blend, in a proprietary proportion at our distillery, all of the components before cutting down to proof for on-site bottling.”

***MEMBER PRICE WILL NOT SHOW ON ORDER.  DISCOUNT WILL BE GIVEN WHEN TRANSACTION COMPLETED BY CV STAFF ASSOCIATE.***

ALL SPIRIT PURCHASES MUST BE PICKED UP AT “CV Wine & Spirits”

Here is an awesome PERK for all you CARPE VINO CLUB MEMBER…your wine purchasing discounts extend to spirits as well!!!  Any bottle you purchase, take 10% off the retail price.  Build a case (of 12+ bottles) receive a hefty 15% discount.  BEST PART…you can mix/match with wine to build your case discounts.  Purchase a case of wine, throw a bottle of SCOTCH (or any spirit you desire) on top and receive 15% off!  Our prices?!?  Let’s just say, the first weekend we were open a customer commented, “these prices are better than COSTCO” and that was before their discount!!!  MUSIC TO OUR EARS!!!

MORE ABOUT THE SPECIAL PROCESS & SHERRY: