Heard somewhere recently and adapted for my personal experience:  “Auburn is where I live, but Chicago is my mother country.”

I love my life in Auburn, but after spending five days in my hometown to soak up the World Series vibe, clearly I’m still a Chicago boy at heart.  I scored an Airbnb carriage house not far from Wrigley, and I quickly fell into the routine of living in a neighborhood again. 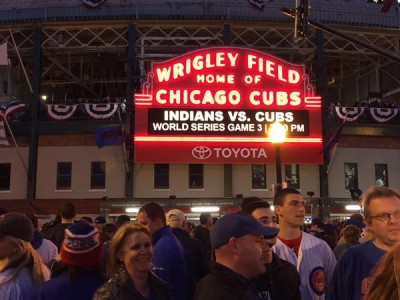 City life is gritty, close and usually noisy, but I relished getting back into the flow.  My senses, numbed by the relative passivity of day-to-day Auburn, were startled into hypersensitivity because of the wild colors, frenetic movement and the racial diversity.  I was happily reminded that not everyone in the world is white.

I spent part of Friday evening hanging out at the ball yard, surrounded by all manner of Cub fans, cops, street hustlers and crazies.  No ticket for me; I just wanted to be there because after 55+ years of bleeding Cubbie blue, this siren series was something I embraced to my core.  Try to keep me away!

After two straight losses, though, my brain could not shield the dark thoughts. . .the euphoric buzz evaporates rapidly in the face of Cleveland’s mantra:  One and Done.  Yet, the Cubs hung on in game five, and now it’s off to the “Mistake on the Lake” to achieve a definitive conclusion.

Since the series is still alive, we’ll continue to serve our signature Chicago Hot Dogs for at least one more night.  Starting with the first pitch at 5:08 locally, our wildly popular tube filets will be available.  I won’t repeat the details here because if you aren’t already informed of this institutionalized baseball staple, oh well.

My hope, my prayer is that the Series goes seven games.  What a thrill that would be, though Cub fans everywhere are stoic and prepared for anything.