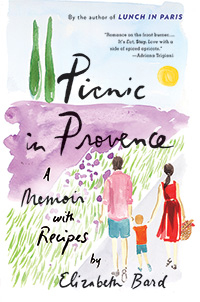 Last year, the Carpe Vino annual international wine trip was to Provence.  As part of my research about the region, I came across a book called “Picnic in Provence,” written by Elizabeth Bard.  It is the memoir of a transplanted New Yorker who first moved to Paris, and then found her true love in both a husband and an adopted home in Cereste, a small town in the foothills above Provence.

I gotta be honest. . .even though it could be construed as “chick lit”, I thought it was a great story and recommended it to all of our travelers.  I was so smitten, in fact, I contacted Elizabeth in advance of our departure and she agreed to meet with me and my beloved, Ellen.

We spent more than an hour with her at a B&B in Cereste.  Before she departed, I offered that if she ever did a book tour in the U.S., we’d love to have her stop in Auburn.

“Picnic in Provence” is being released as a paperback, and during a trip to San Francisco as part of her book tour, Elizabeth will be in Auburn for two nights.  On July 14th, we’ll be hosting a book-signing event for Elizabeth. . .with more details to follow soon.  Expect to see a book paired with French wine and apps.