Discover the Treasures of Carpe Vino’s Wine Mine

Book the Wine Mine for your intimate party or special event. Call 530-823-0320 or contact us for open dates and times. 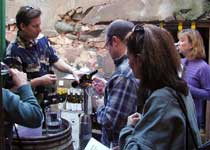 While most visitors to Carpe Vino are genuinely impressed with the renovation of the Union Saloon, most jaws drop when people are invited to view the ancient stone building in the rear.

Exiting the main structure, which we believe was built in 1855, you enter a narrow passage that leads immediately to what we now refer to as the “Wine Mine.” This is a simple storeroom built into the side of the hill behind Carpe Vino. There is no street access to this area. To the immediate left is a fence that separates us from the patio of the California Club (an old honky tonk and biker bar); to the right is the brick wall of the neighboring storefront.

We cannot confirm it, but we believe the Wine Mine may be the oldest building in Old Town Auburn, constructed in about 1850 by Chinese laborers. It was likely erected before the main building, otherwise building materials would have been carried through the saloon. Chinese labor would likely have been used for construction, because they did all the heavy lifting in those days.

Another possibility, according to research by volunteers working for the Placer County Department of Museums, is the structure was built after the original building to serve as an ice house for an oyster bar operated by a permutation of the Union Saloon. Actual age not-with-standing, going inside is like entering a time warp. On the right is an archeological cross section of Auburn: a cutaway of the building next door butts up to a flow of hillside that cascades into the structure. An ancient beam and post rot silently, thankfully supporting nothing but their own weight.

The other three sides of the building are constructed of stone set in place by some long-dead workmen, totally clueless their toil would provide shelter 150 years hence for wines from California and around the world. The stones are large and incredibly hard; they were probably sourced locally and some have been chiseled smooth. The sandy material that is the mortar is so fragile, it crumbles with the slightest touch.

Wine Mine was a Bonus Room

The building has suffered mightily over the years. In an attempt to strengthen the exterior, the wall was skim-coated with concrete. Chunks have broken off, but the building appears sound enough. A section of the back wall apparently collapsed at some point because it has been shored up with huge posts and a concrete retaining wall.

When we leased our store, we weren’t even aware of the little building in the back. The space was a nightmare, though, crammed with junk and debris collected over decades. Plus, the alleyway was filled with broken bricks, steel framing and other materials junked when the façade was razed in 2001. All told, we removed more than seven tons of waste from both buildings and the alley.
Once the place was emptied, we couldn’t believe how much more expansive the space appeared, though the potential for creating a wine cellar environment was apparent the first time we opened the heavy steel doors of the entrance.

Our rehab was unobtrusive. We cleaned the place as best we could, and then installed R-30 encapsulated insulation in the ceiling joists that support a simple, corrugated tin roof. To seal roof leaks, we screwed down the tin and covered seams with a special waterproof tape. We pulled new wire though some existing electrical conduit and then installed track lighting. The only other addition was building in shelves utilizing the existing beams installed in the retaining wall.

“What the Heck Went on in Here?” 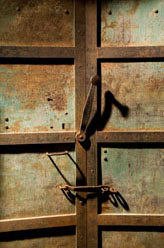 Upon entering the Wine Mine, most people just shake their heads. “What was this used for?”

The short answer is we don’t know. Beyond being a storage room, we’ve been told it has seen uses as a morgue and a temporary cell for prisoners. Since it was a windowless room behind a tin-horn bar for years, one can only imagine what went on in the space.

We do know the Saloon was used as a mortuary at one point, so bodies could have kept in the cool confines of the stone building. It works nicely for the wine!

People also want to know if we found anything valuable when we gutted the place. We never uncovered any gold, but we did unearth a skull and jaw bone that we believe are a cat’s. We just found the usual stuff: square-headed nails, a horseshoe, old bottles and some dishware. On the seamy side, we found several hypodermic syringes, but no needles.