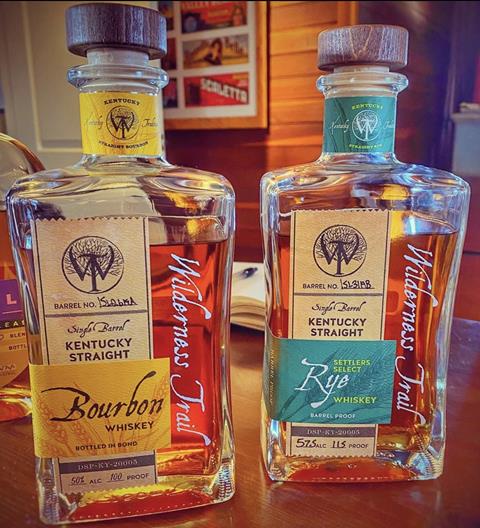 “You can walk into any liquor store, walk down an aisle, stop, and be within arm’s reach of a brand that we’ve worked with…”

This is one of the most exciting domestic brands we have been able to help launch in California since we started selling Bourbon/whiskey here at CV Wine & Spirits.  As you will read below, when you take a mechanical engineer along with a PHD microbiologist/biochemist whom have spent the last couple of decades FIXING or TROUBLESHOOTING some of the best distilleries in the worlds problems…how can’t they make an AWESOME whiskey?!?

While researching the background on Kentucky Wilderness Trail, we found an awesome article from Brian Oh, called “Wilderness Trail Launches It’s First Whiskeys” published on April 25th, 2018.  His account of their history couldn’t be summed up any better, so here you go…

“When new distilleries hang out their shingle, many establish their whiskey-making credentials through a family legacy or local historical connections. But Danville, Kentucky’s Wilderness Trail—which is releasing its first bourbon and rye in April 2018—has taken a different approach. Rather than finding a colorful story to tell, co-founders Shane Baker and Patrick Heist are emphasizing the scientific pursuit of distilling great whiskey.

Baker, a mechanical engineer, and Heist, a PhD microbiologist and biochemist, initially paired up in the 1990s, playing in a grunge and hard rock cover band. Their initiation to whiskey-making, however, started with the consulting company Ferm Solutions, which they founded in 2006. Baker and Heist made a name for themselves as troubleshooters for distilleries around the world, helping clients start distilleries, consulting on bacterial contamination, developing mashbills, and analyzing grain quality, yeast strains, and fermentation. While they can’t disclose the names of their clients, Heist says that they would be recognizable names. “You can walk into any liquor store, walk down an aisle, stop, and be within arm’s reach of a brand that we’ve worked with,” he says.

All of that work inevitably led Baker and Heist to have a go at whiskey-making themselves, opening Wilderness Trail in 2012. Baker describes Wilderness Trail as the “collective optimization of hundreds of distilleries around the world.” While the two men continue to help other producers through Ferm Solutions, they are now employing their expertise to make their own whiskey as well, carefully designing each element and step of the process.”  To read the complete article – CLICK HERE

SO WHAT ARE WE OFFERING?!?

“Our high in small grain Kentucky Straight Bourbon Whiskeys are offered as a Single Barrel – Bottled in Bond. Two special releases in one bottle! The Single Barrel selection offers nuances only premium cooper select barrels can create from their toasting and using 18-month-old air-dried staves. After all, the barrels impart a large part of the flavor.

In addition, the Bottled in Bond gives you assurance the Bourbon was properly distilled, aged between 5-6 years and bottled by us under the supervision of the U.S. Government at 100 proof.

What is the mashbill?

Our Bottled in Bond release mash bill is 64 percent corn, 24 percent wheat and 12 percent malted barley using our yeast strains. This is one of the highest ratios of wheat used in a Bourbon made in Kentucky. We entered the cooper select, toasted and #4 char barrel at 110 proof after coming off the still around 137 proof. We then age our Bourbon in our two -story Rickhouse A, moving floors each year of maturation.”

Our Kentucky Straight Rye Whiskeys are offered as a Cask Strength release. Once our traditional sweet mash process is distilled in our column stills we enter the barrel at the lowest entry proof we know of in Kentucky. We barrel at 100 proof and 105 proof to highlight the balance of the distillate and alternate solubility expression we get from the barrel at a lower proof. We also barreled at a gradient of proofs between 100 and 120 proof for our first few years before settling into 100 and 105 proof. This is the reason you will find releases of our cask strength Rye varying in proof.

Our three-grain recipe is 56 percent rye, 33 percent corn and 11 percent malted barley. Our rye mash bill is one we created for a broader balance of flavor to offset the typical high ryes commonly found. We use Kentucky-grown Heritage rye from our local KY Proud farm. We enter the new, air-dried #4 char, 53-gallon barrels at 100 proof and 105 proof for our Rye Whiskey and age until maturity in our barrelhouse. We age our Rye Whiskeys on the upper floors of our rickhouses for a minimum of 4 years with regular expressions expected to be between 6 and 8 years of age.