ONLY 12 BOTTLES IN STOCK! 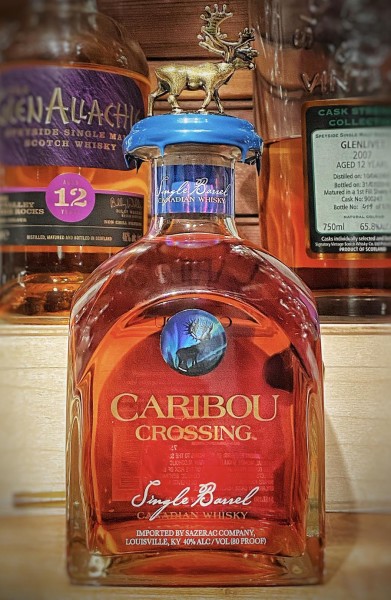 THE BLANTON’S OF CANADIAN WHISKY……No Seriously!

Listen, don’t stick your nose up just because this isn’t Blanton’s!  Whatcha need to do, is listen to this quick story and then buy a bottle (or two) and stick your nose in a glass of this beautiful brown libation so you can see how delicious it really tastes!  Oh, and the whole Blanton’s relationship…it’s real!

Last fall we were about seven months into our new bottle shop being open and navigating what people were looking to buy, well, was interesting.  Our goal has always been to seek out high quality wines & spirits, that you might not necessarily find in the grocery store liquor isle or at your corner bodega.  Fact is, just like wine, it’s nearly impossible to not have some overlap but we have done pretty good thus far as to keep that overlap to a minimum.  One whisky we found last August “CARIBOU CROSSING,” was the perfect complement to our ever-growing inventory.  It looked like Blanton’s, felt like Blanton’s and it wasn’t Bourbon.  We had roughly 12 bottles and after about six text messages to customers…POOF…it was gone!  To put it simply, we have tried re-ordering this Canadian whisky every week since last September and late last week received another 12 bottles.  YUP…another six text messages and it was gone.

With everything going on in the world, allocations have opened up a little bit more and we received some additional bottles.  Another 12 to be exact!  Here is a few more reasons why you should hit the “BUY NOW” button, just in case you need a little convincing!  Also, we are pretty sure this will be a “final/final” opportunity to purchase until late fall!

Those of you who think Canadian whiskies are thin and bland should give this one a try. No, it’s not a new concept, like Forty Creek. It’s still very much a “traditional” Canadian. But when compared to most Canadian whiskies, it’s richer, creamier, and velvety smooth. The flavors are straightforward — primarily vanilla, with some crème brûlée, toasted marshmallow, tangerine, peaches and cream, and gentle rye spice — but they are clean and well-balanced. A delicious, lighter-style whisky.