Every day from December 13th-24th, CV Wine & Spirits will be sending out an email precisely at 10am with a limited offering and/or deal on Whiskey!  Our “12 DAYS OF WHISKEY-MAS” specials will offer everything from Single Malt Scotch, Rye Whiskey, American Whiskey, Bourbon, allocated and non-allocated items.  Most deals will have two “PURCHASE” buttons, one for members and one for non-members.  To view and purchase member prices, you must click “MEMBER PURCHASE” and login to your account.  All deals being offered our limited to quantity on-hand. 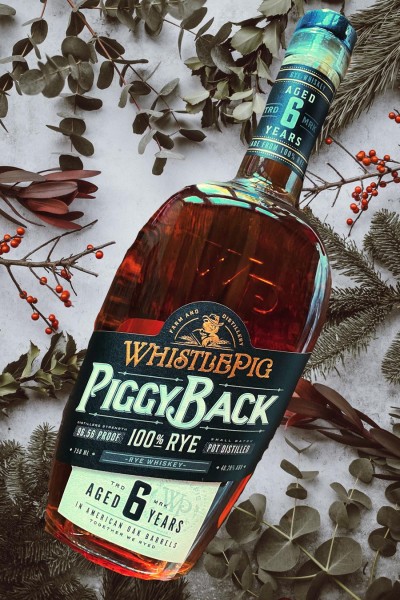 “Here’s to the PiggyBack ride you all deserve!” -Dave Pickerell, Master Distiller

While everyone has been going crazy during the “Bourbon-Boom,” Master Distiller, Dave Pickerell took his talents to VERMONT and began working with a startup rye whiskey producer named WHISTLEPIG.

“Rye was a particular passion for Mr. Pickerell, who viewed it as forgotten in the United States. He discovered in Canada barrels of unused rye whiskey, which WhistlePig bottled as the original iterations of its brand, and he brought his knowledge of production and aging to that fledgling distillery.

“He ended up taking a concept — large distillation and large factories — and distilled it so that entrepreneurs like us could manage it down to a small still,” said Jeff Kozak, the chief executive of WhistlePig. “There was nothing more exciting than when the still arrived and we put it together.” – By Richard Sandomir, NEW YORK TIMES, Nov. 8, 2018

Pickerell spent 14 years working at Maker’s Mark and exponentially increased its production from 175,000 cases to over 1,000,000 cases annually.  It’s no wonder WHISTLEPIG quickly became one America’s most sought-after whiskey’s (all whiskey, not just rye) and was nearly impossible to find.  With the company’s success, growth was inevitable and new labels and age statements would soon be released.  One of those new labels, PIGGYBACK, a 6year old 100% rye whiskey was released in late October to restaurants and bars only.  In creating the PIGGYBACK, Pickerell wanted to give back to bartenders. He wanted to make a whiskey that could be enjoyed any way, and at a good price point!  GUESS WHAT?!?!  He did, because this PIGGYBACK is absolutely delicious and now available in our retail shop at $30 less per bottle than its big brother.  It’s a downright steal!

Unfortunately, Mr. Pickerell never saw the launch of his new project as he passed in November of 2018 at the age of 62.  With respect, the distillery added a couple of fun tributes to the label if you look closely and/or are in the know!  The Piggyback is 96.56 proof, which is a nod to ’56, Pickerell’s birth year.  Also, the pig on the label is wearing one of Pickerell’s iconic hats which he was known to wear regularly.

Honestly, this is worth every penny of $50/bottle but its worth at least two or three bottles at $42.56 because that price won’t be around again soon!