I’ve got a lot riding on this dinner, and I am determined it will be perfect.

Carpe Vino’s “España” prix-fixe event that runs from November 19 to 24 is the culmination of planning that began early in March, continued with a two-week trip to Spain in October, followed by a winnowing process to select just the right wines to pair with Chef Alexander’s four-course menu (which you can view by clicking here).

We’ve been featuring monthly prix-fixe dinners for three years, and this is the first time I have ever nudged my way into the Chef’s world to consult on a menu.  I had some general ideas about what should be included, but I also insisted on one dish that I encountered in Santo Domingo—the appetizer Pimientos del Piquillo Rellenos.  More about that later.

The cuisine of Spain I encountered ran the gamut from rustic to refined, but most of it was rather simple, straightforward preparations that focused on hearty cuts of meat—not counting the more modest portion sizes presented with tapas dishes.  Remarkably, fresh vegetables—especially salads—were not routinely served with meals.  The ladies in our 20-person group rebelled, and we were finally able to solve this problem by ordering ahead. 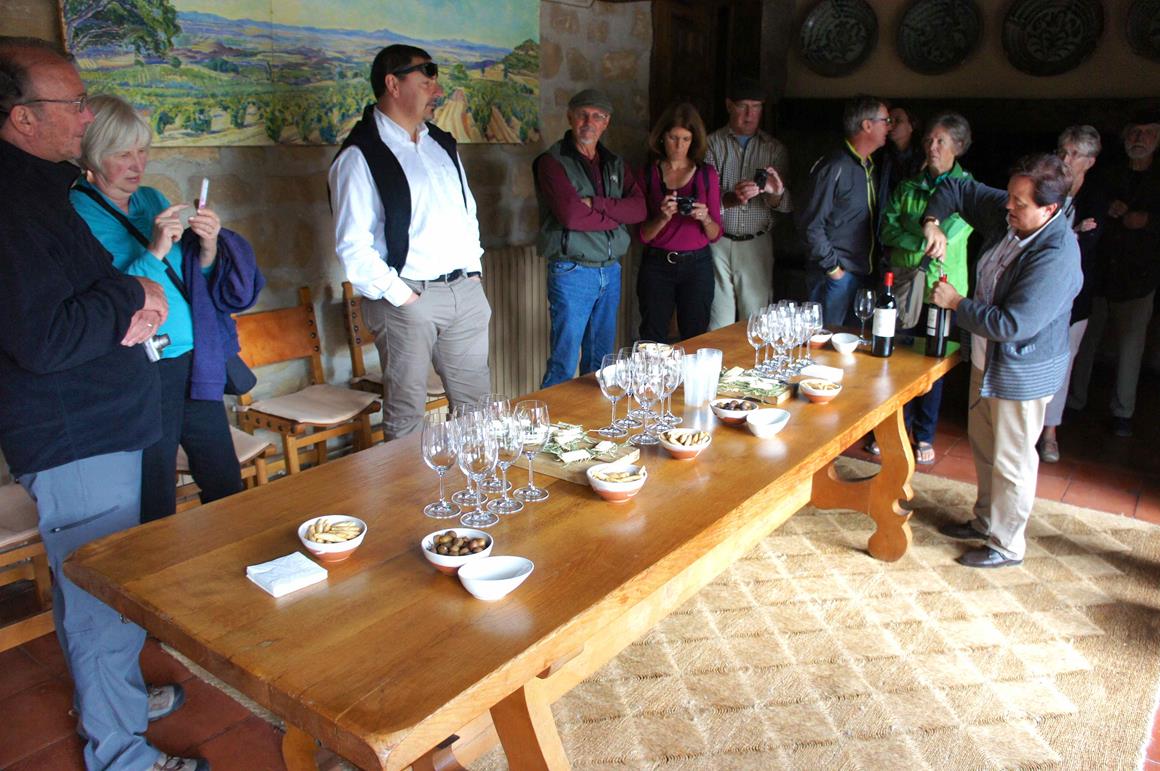 Our group gets ready to taste wine at Remelluri, a beautiful estate in the heart of Rioja.

I sat down with Chef Alexander to interpret his dishes (his creations, not mine!), especially those that are unique to Spanish cuisine.  You’ll be pleased to know that many ingredients for this menu are imported, especially the Spanish olive oil, which was the cover story of last month’s Wine Spectator magazine.

Selection of Classic Tapas:  Back in the day, some clever Spanish restaurant owner figured out how to keep insects out of his customers’ wine glasses:  cover them with a piece of bread.  Eventually, toppings of all kinds—mostly simple—were added and tapas was born.  Even today, many bar owners provide free tapas when you sit down at a table, as long as you order wine.

All of Chef Alexander’s tapas selections are served either cold or at room temperature on a single plate, starting with the classic Serrano Ham, imported from Spain and shaved thinly.  Next, Pan Con Tomate is toasted bread rubbed with tomato pulp (I observed our Spain guide, Cesár, make his own version at breakfast one morning).  Also served is a skewer of Manchego cheese imported from LaMancha plus Tortilla Español, a classic dish of potato, onion and eggs that Chef described as a sort of Spanish frittata.  Completing the presentation are a couple of Boquerone Stuffed Olives, Spanish olives that are slit and stuffed with house-marinated white anchovies prepared with olive oil, chili flakes and lemon zest.

La Bomba de Barceloneta:  Spain is a country that has suffered through a long history of war, including persistent separatist factions that have often resorted to violence.  This dish—the signature tapas of Barcelona—was created to represent a weapon of war; it resembles an 18th century bomb—a round device with a fuse, packed with shrapnel.  Tastes better than it sounds!

It starts with a mixture of ground beef and pork rolled into balls, then surrounded by a potato mixture that is breaded and then deep-fried.  It is topped with Bravas Sauce (chilis) and Aioli, a traditional garlic mayonnaise.  These things are so tasty they’ll blow your mind!

Pimientos del Piquillo Rellenos:  If I had to choose a favorite dish from my visit to Spain, it is this one.  It starts with beak-shaped, sweet red peppers indigenous to Spain.  Chef fire-roasts the peppers, and then stuffs them with a mixture of whipped salt cod (Bacalao) with garlic, thyme, olive oil and cream.  Potato is used as a binder, whipped until light and fluffy.  The stuffed peppers are then warmed through, served with wild arugula and drizzled with Arbequina Spanish olive oil.

Galician White Bean Soup:  Our Spain tour took us to the wine regions of Rioja, Navarra, Ribera del Duero and Priorat.  We did not go to Galicia in the northwest corner of Spain (where Portuguese is spoken), but this dish is a wonderful representation of Spanish peasant fare.  It is a hearty fall soup, made with imported, dry-cured Chorizo, kale and saffron. . .the source of the orange tint to the dish.

Mixed Fall Lettuces:  This is a classic fall salad featuring Spanish goodies:  Valdeon Blue, a soft cow’s milk cheese sourced from León; fennel; the world’s most highly prized almonds, Marcona; and Membrillo puree that Chef Alexander imported from Spain and then added a bit of vinegar to balance sweetness.

Seared Dayboat Scallops:  The tasty mollusks will be prepared perfectly to rest on a bed of Bloomsdale spinach (that’s the variety) sautéed with raisins, pine nuts and diced apple.  Served with caramelized cauliflower and pine nut praline (a puree sauce).

Slow-cooked Lamb Shoulder:  Lamb is another staple on Spanish tables.  We source ours from a ranch in Dixon; it is braised for eight hours in red wine from Rioja.  Served with braised chickpea stew, imported chorizo poached in red wine from Rioja, Nantes carrots and drizzled with parsley oil.

Crispy Pork Belly “Lechón” Style:  Roasted suckling pig is called “Lechón” in Spain, and we had it twice during our tour. . .crispy and delicious.  The most memorable experience was at a restaurant in Segovia in the shadow of a Roman aqueduct called Meson de Candido.  In a flamboyant show, the pig was brought out on a platter, a proclamation was read and the maître d’ used a small plate to stab the poor animal into portions.  It took just a matter of a few seconds and then he tossed the plate on the floor, shattering into a hundred pieces.

We don’t have the facilities to roast whole suckling pigs, so Chef Alexander—inspired by the idea—is using pork belly, which he’ll roast in the same style, aiming for crispy, crackling skin.  A Serrano jamon-wrapped tenderloin slice is served alongside, with chestnut puree, dates, Jerez sherry and burnt orange jus. . .adding a Moorish influence (not counting the pork!).

Classic Caramel Flan:  This dish is prepared with caramel on the bottom, covered with custard and then slowly baked.  The dish is then inverted and the caramel oozes over the sides.  Served with Maldon sea salt and candied orange.

Pastel Vasco:  This cake is associated with the Basque region and is often called “Gateau Basque” because of the substantial French influence in the region.  It is made in a mold with a layer of cookie like dough (rich and creamy with lots of butter) on the bottom, followed by a layer of custard, followed by another layer of dough.  It is baked and then served in wedges with quince poached in wine and vanilla, topped with crème fraiche. 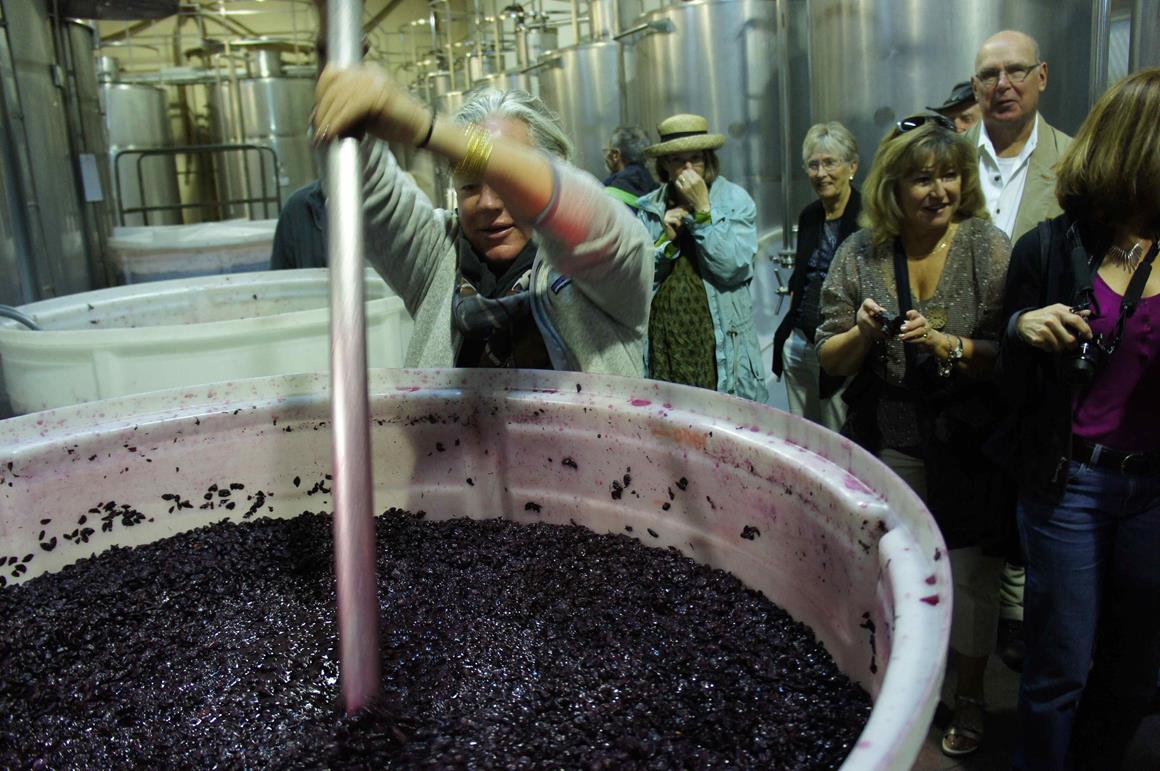 Punching down in Priorat: Ellen MacInnes applies muscle during a winery tour in this wine producing region south of Barcelona.

The basic reason for my tour of Spain was to search for new wines, and we found a bunch.  In fact, at every bodega we visited, I found wines I knew we could sell at Carpe Vino.  In next week’s email I’ll have a detail review of the wines available for the prix-fixe dinner, but here is the rundown (lots of Tempranillo in a wide range of flavors, styles and price points):

We’ll also be serving two house wines:  a 2009 Crianza from Rioja and a 2012 Chardonnay from Navarra.