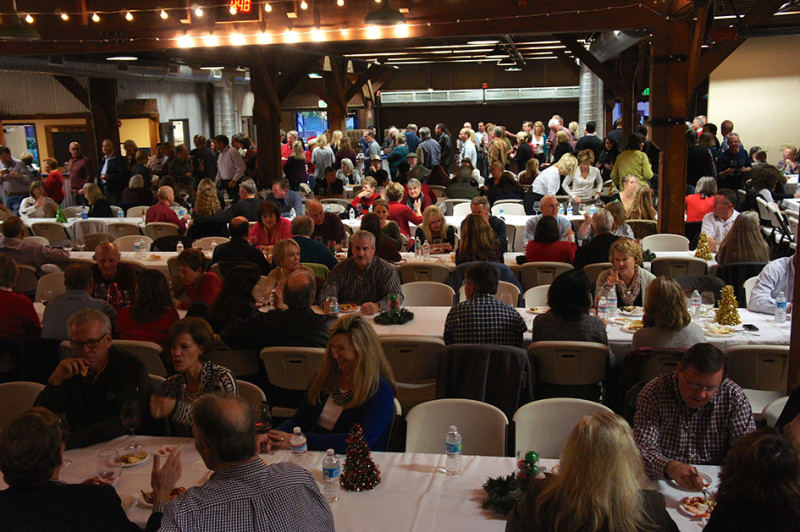 This is what 400 wine lovers look like crammed into the Blue Goose Events center. And everyone had a seat! 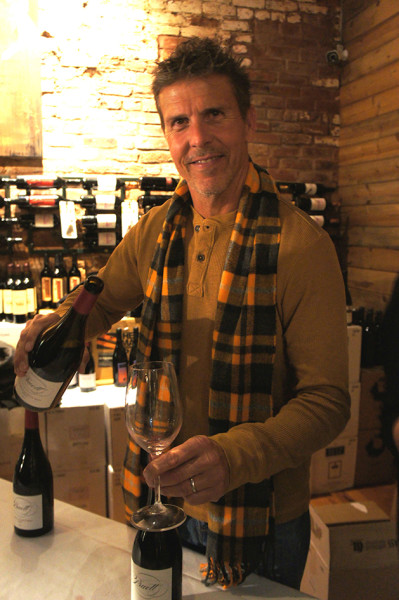 Scott Pruett (and his wife, Judy) joined us for the tasting and poured his wines that scored 90+ from Wine Spectator magazine.

Ada, Cailey and Brittany appear to be a bit to chummy at the Carpe Vino Wine Club holiday party, but. . .we're family.

Our diminutive but scrappy line cook, Olivia, is dressed to the Holiday nines as she greets guests moving through the banquet line.

Helping to bring down the average age of party-goers are CV regulars Brian and Jen Jansen of Auburn.

Lilia O'Connor seldom misses a Carpe Vino bash, except when she's traveling Down Under to visit her family.

Most of the folks seated at this end of the table joined Gary and Ellen on a wine tour of Spain in 2013.

It didn't take long for these tasty shrimp to disappear once the locust descended!

Tom and Paul are working feverishly here to charge up the first wine glasses before the doors opened at 4 p.m with 150+ guests in line.

Okay, so we cheated a bit and brought in Chando's Tacos to supplement our menu with gourmet Mexican fare.

More than 175 of the faithful rallied at Carpe Vino on December 2 for our annual Holiday Tasting.

For the third year in a row, some 400 Wine Club members descended on the Blue Goose Events Center in Loomis for Carpe Vino’s annual holiday party, a member’s-only event.  The previous Tuesday evening, some 175 of the faithful jammed the Friendly Confines when we opened 65 bottles of wine for tasting, including Scott and Judy Pruett pouring their 90+ point new releases.

Okay, the wine and food were on us, but it’s amazing to see 150 people standing in line at 4 p.m. on a Sunday afternoon.  I personally greeted everyone (or tried to!) when we opened the doors to this throng. . .which was decidedly more civilized than a mob waiting outside of Target on Black Friday.

Our Wine Club is the linchpin of our business, with a membership that is now 1,175 strong and growing (though more slowly now that so many people have joined).  We do our best all year long to show the love—with every-Saturday free tastings hosted by Jay Johnstone, fabulous monthly wine selections and a dazzling array of perks associated with the restaurant.

But for me, I genuinely look forward to the craziness of our annual holiday party.  This event has become our signature event and a true link with our members, who come not only for the great meal, but also for the opportunity to reconnect with other members they have met over time.

Here’s a good example:  in 2013, I led a group of 20 Wine Club members on a wine tour of Spain.  Ten of these folks—including Will and Blanche Sutter who traveled from Santa Cruz—enjoyed a mini-reunion Sunday night.  It was a blast to see everyone again, and I let them in on some news:  I’m organizing a trip to Provence for next October, and it looks as though we may put the band together again.

A ton of hard work goes into creating this event, especially when you consider it’s not exactly central to what we do in a 34-seat restaurant.  Chef Alexander and his crew did a fabulous job though, and this year they had some help.  Kevin Summers—a Sacramento firefighter, one-time Carpe Vino intern, two-time California State Fair Golden Bear recipient (for winning the statewide fire station cook-off) and now operator of his own catering firm—did all of the pass-around appetizers.  Also, we brought in Chando’s Tacos truck to prepare a delicious array of their Mexican specialties. . .quite yummy!

And then there was the wine. . .we poured the good stuff, starting with Rombauer Merlot and Luli Pinot Noir plus Banshee, Big Star and Ridge.  Drew put together a fabulous list of premium choices, and he organized the evening with help from Ada and her front-of-the-house crew.

It was crowded.  It was noisy.  And the serpentine lines for food appeared endless, but nobody seemed to care.  Because this celebration of food, wine and friendship in a classic building was enough to trump any perceived inconvenience.

Speaking for Drew, Eric, Ada and our entire staff, I want to thank everyone for coming and for your direct role in making our business a success.  There aren’t many independent wine stores in business any more thanks to pressures from the big box stores and intense Internet competition.  But in my heart, I know we’re doing something unique and very special at our little spot in Old Town Auburn.

And, no doubt, that’s why you keep coming back.