Every day from December 13th-24th, CV Wine & Spirits will be sending out an email with a limited offering and/or deal on Whiskey!  Our “12 DAYS OF WHISKEY-MAS” specials will offer everything from Single Malt Scotch, Rye Whiskey, American Whiskey, Bourbon, allocated and non-allocated items.  Most deals will have two “PURCHASE” buttons, one for members and one for non-members.  To view and purchase member prices, you must click “MEMBER PURCHASE” and login to your account.  All deals being offered our limited to quantity on-hand.

No Further Discounts – Only 11 In Stock 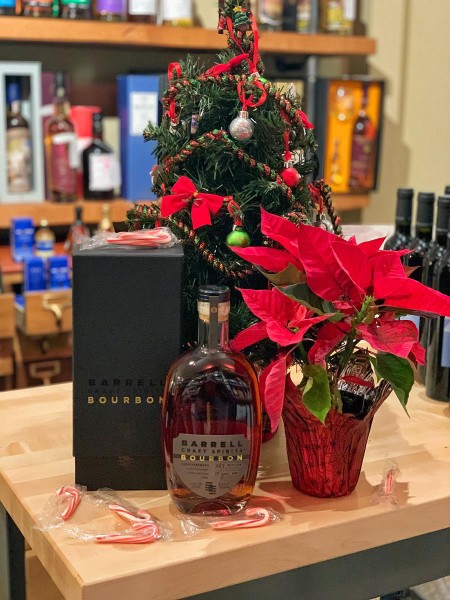 One of the hottest Bourbon brands on the market comes to us from Barrell Craft Spirits based in Louisville, Kentucky.  “Barrell Craft Spirits,” is an independent blender and bottler of unique aged, cask-strength sourced whiskey and rum, that is increasingly being recognized for its blending expertise. They conceive of, design, launch, and talk about Spirits with a focus on what people want now and not what has been successful in the past. This affords them access to some of the most interesting and delicious spirits in the world.”

Barrell (that is how they spell it) was launched in 2013 and the distillery has grown to produce roughly 35,000 bottles of whiskey and rum a year, grossing over $8.5mil in sales!  The Barrell Craft Spirits was conceptualized over a three-year period, which came to fruition with last year’s release of Barrell Craft Spirits Bourbon Release 1.  Their intent is to blend a set of spirits defined by absolute balance and deep flavor layering. The barrels harvested for this limited release were selected for their refined properties and extraordinary flavor profile.  This “cask strength” 15 year-age Bourbon was blended from barrels distilled and aged in Kentucky, Indiana and Tennessee.  As you can see from the above score and distinguished honor of being named “BEST AMERICAN WHISKEY,” they are on to something.

Cask Strength – Cask strength is a term used by whiskey producers to describe a whiskey that has not been substantially diluted after its storage in a cask for maturation.  – Wikipedia

Even though BCS distributes to 43 states nationwide, their Bourbon stays mostly on the east coast and after the Forbes recognition, became IMPOSSIBLE TO FIND ANYWHERE.  That’s why when we had the chance to snag a couple of three packs (around 100 bottles for the state) of the Barrell Craft Spirits Bourbon Release 2, we wasted no time at all!  With only TWO DAYS left of “WHISKEY-MAS” deals, this is the perfect opportunity to grab that last-minute gift or rare bottle for your collection, because once these are gone…they are gone!

​Nose: The central theme is of pie, notably Boston cream and pecan. Armagnac, and fig jam lend a dense, dark fruitiness. Herbal notes constantly pop to the fore and then gently ebb, cycling through spearmint, ginger ale and pandan leaf. The bottom register ranges between sweet and savory; from maple syrup on one side through halva and soufflé, to gorgonzola on the other.

​With a splash of spring water: Water brightens the fruit, bringing out chocolate dipped, candied grapefruit peel. The palate grows rich and creamy, tasting of roasted chestnut and rice pudding.

No Further Discounts – Only 11 In Stock