Every day from December 13th-24th, CV Wine & Spirits will be sending out an email with a limited offering and/or deal on Whiskey!  Our “12 DAYS OF WHISKEY-MAS” specials will offer everything from Single Malt Scotch, Rye Whiskey, American Whiskey, Bourbon, allocated and non-allocated items.  Most deals will have two “PURCHASE” buttons, one for members and one for non-members.  To view and purchase member prices, you must click “MEMBER PURCHASE” and login to your account.  All deals being offered our limited to quantity on-hand. 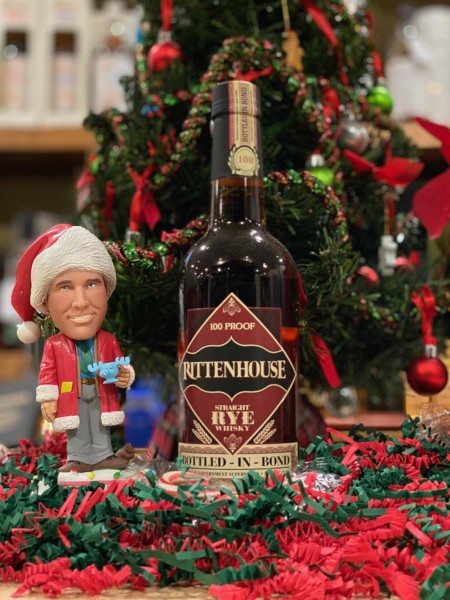 “Rittenhouse is the Rye whiskey of choice for both mixologists and whiskey aficionados alike.”

For the “SEVENTH DAY OF WHISKEY-MAS” we’re offering the RITTENHOUSE RYE, probably our TOP PICK or BEST VALUES for under $20/bottle (member price) in CV WINE & SPIRITS!  This is your new TUESDAY night sipper!

This Rittenhouse Rye was produced at Heaven Hill Distillery which is also responsible for some of your other favorite whiskey brands including; Larceny, Elijah Craig, Henry Mckenna, Old Fitzgerald, Parker’s Heritage, Pikesville Rye, along with several others.  ***We carry all of the labels just mentioned – email us thecvcrew@carpevinoauburn.com for any inquires.***  Undoubtedly, they are one of the premier American whiskey producers and the quality/value of their expressions is a major reason why.  This is true for their entire line-up of everything from $500/bottle down to their sub-$30 bottles, as you will see with this RITTENHOUSE RYE!

Rittenhouse Rye Whiskey has a storied past with a heritage that commemorates Philadelphia’s famous Rittenhouse Square.  “Produced in the tradition of the classic Pennsylvania or “Monongahela” rye whiskeys, which are believed to have had a spicier and fruitier flavor profile. This style is said to be a high rye mashbill consisting of 80-100% rye grain. Ironically Rittenhouse is a low rye (50+%) which is typical of the modern Kentucky rye mashbill.” –BreakingBourbon.com

The remainder of the mashbill is corn/malted barley revealing a more suitable rye whiskey for a bourbon drinker.

WHY SHOULD YOU BUY IT?

1.)    WINE ENTHUSIAST 95 POINTS – A versatile must-have for mixing cocktails, look for pleasing vanilla, maple and a hint of dried cherry. The finish is long and drying, with plenty of baking spice notes.  – (7/16)

2.)    Whiskey Advocate – “Rittenhouse packs lots of corn, offering a different profile than those higher-rye whiskeys from Indiana. Straight from the glass burst caramel, campfire smoke, and vanilla, with hints of dill weed and Herbs de Provence. Ripe in flavor, it shows slight mint from the rye and a complex voyage of herbs with a touch of chocolate here and walnut shell there. There’s a reason bartenders love mixing with this; it’s good neat or on the rocks.”  (8/16)

3.)    Perfect mixer for a Sazerac, Manhattan, Old Fashioned, or a bevy of other cocktails.  That’s why, bartenders/mixologists love Rittenhouse for its PQR or “Price Quality Ratio.”  Makes them look good with the client and their boss!

Bottled-In-Bond, is a label for an American-made distilled beverage that has been aged and bottled according to a set of legal regulations contained in the United States government’s Standards of Identity for Distilled Spirits, as originally laid out in the Bottled-in-Bond Act of 1897.  – WIKIPEDIA

Essentially, ​to be called “Bottled in Bond” it also has to be the product of a single distillery, made in a single season in a single year.