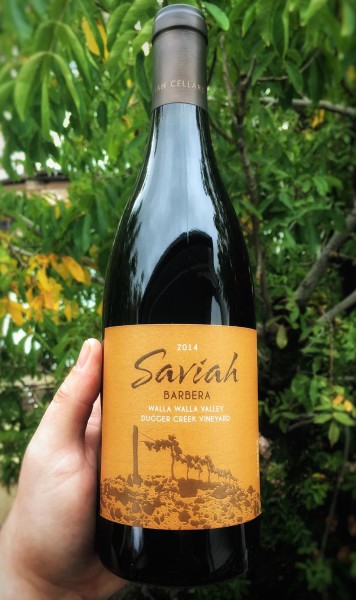 Less than 48 hours ’til THANKSGIVING!

HANDS DOWN – FAVORITE WINE – FAVORITE DEAL of NINE DAYS OF WINE DEALS!  Saviah Cellars, located in Walla Walla, Washington was founded in the year 2000.  “Saviah Cellars’ first commercial vintage was just 300 cases.  Since then, the winery has grown significantly and in 2009 was named One of the Top 100 Wineries by Wine & Spirits Magazine, in 2010 Saviah Cellars was called One of the Rising Stars in Washington by Wine Spectator and in 2013 The Jack brand was named one of the Top Value Brands of the Year by Wine & Spirits Magazine. Today, the winery produces approximately 25,000 cases annually.” – From the winery and we couldn’t say it any better ourselves.

Saviah runs the gamut when it comes to the different varieties of wine they bottle, but one our favorites is the 2014 Saviah “Dugger Creek Vineyard” Barbera.  Only 271 cases were produced, and we are one of the only restaurants/retail accounts to carry the wine, not only CA but nationwide!  We purchased the last 8 cases in existence with the specific goal of offering up a special little price for our NINE DAYS OF WINE DEALS.

We know most people love Barbera and you should…they are DELICIOUS.  What makes the 2014 Saviah “Dugger Creek Vineyard” Barbera so special is the fact it tastes so similar to Barbara d’Asti that you would find in Italy.  We’re not kidding.  One of the most distinguished single vineyard Barbera & Barolo producers in Lagnhe, Italy is called “Vietti.”  For five generations, the Currado family has managed and crafted these wines.  On a recent trip to the US, winemaker Luca Currado’s wife, Elena, had been on a public relations tour throughout the west coast.  She was fortunate enough to taste the Saviah Barbera and remarked “It’s the best American Barbera she has ever had.”  Now that’s a personal “vouch” you can trust!

Tasting Notes: “This Barbera grown at Dugger Creek Vineyard exhibits aromas of red and black fruits, currants, cigar box and a hint of toasty oak spice, followed by flavors of juicy red berries, cranberry, dried herbs and citrus peel. With its velvet smooth tannins and spirited acidity, it is enjoyable with food or without.”

WANNA SEE THE OTHER DEALS???