ONLY 4 CASES LEFT!  THEN GONE ‘TIL NEXT YEAR! 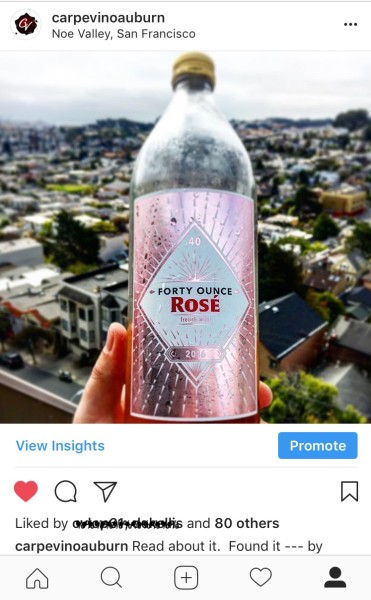 “Read me now, believe me later” this is one of the best values on the market and it just hit the floors of CV at 6am this morning!!!  On July 31st of 2017, I was in San Francisco visiting some friends and we happened to stop at “Bi-Rite Market” in the Dolores/Mission district.  For those not familiar with “Bi-Rite Market” it’s like the original “Whole Foods” just much quainter (a must visit if in the area).  Scouring for cheese, we stumbled on a display with this unique shaped bottle with a fantastic label/name which instantly sparked my curiosity.  Seeing the price for a true FRENCH Rose, less than $20/bottle for 40oz (1Liter), I turned to my friends and said, “we gotta try one, actually…better make it two!”

The group consensus was we couldn’t believe the “quality-to-price” ratio for this wine!  I’m not going to tell you it competes with the $50/bottle “whose/whose” of French Rose producers, but 40 cents an ounce (on 6+ bottle price)…this just became my new “go-to” wine of the summer.  I liked it so much, I sent an Instagram photo (pic above 7/31/17) to inform our social media followers that this baby was on its way to CV.  UMMM…not so much.

When I returned home to Auburn and reached out to the national distributor (based in NY) I tried to place an order.  To my surprise, the person on the other end of the phone started laughing at me.  Literally, laughing at me.  I told them I was interested in buying at least ½ pallet which they replied, “aw honey, that’s sweet but that wine sold out in two weeks back in April.”  Awww…snap!

Apparently, Forty Ounce Wines only sells in New York, Pennsylvania, New Jersey, California and Colorado and their production is a minimal 1200 cases.  Take the quality of the fruit, reputation of the winemaker, packaging, NAME and throw in this article from FOOD & WINE magazine and you just went viral!  Late to the party, yes, but I was determined to get the next vintage!

Recently, we have started working with a boutique wine broker out of the bay-area and in looking through their book (aka wine catalog), low behold, there was the “FORTY OUNCE WINES” brand.  He quickly informed me that last year he sold all that wine, in a two-week period solely in the Bay-area.  It’s now January of 2018 and I wasn’t going to miss the boat, so I figure get the order in before ROSE even crosses the competitions mind.  That day I placed our order for 28 cases which was scheduled to arrive in April.  Every couple of weeks I would ask…is it here yet, is it here yet?  Well…it’s here now and its spectacular!  So like the last sentences of the FOOD & WINE article says: “So basically… go. Go now. Seriously, there’s nothing left to read. Go.”

Grapes from Muscadet and Touraine

The Washington Post says:  “Forty Ounce Rosé, a French rose from the Loire Valley, set the Internet on fire this spring, thanks to its distinctive packaging: Screw-top bottles that resemble those more often filled with malt liquor. It was originally only released in five states: New York, California, New Jersey, Pennsylvania and Colorado, adding to its cachet.

Behind the gimmicky, Instagram-ready bottle, though, is some serious cred: Forty Ounce Wines was founded by New York sommelier Patrick Cappiello, the wine director at Rebelle and Walnut Street Cafe, who’s been named “Sommelier of the Year” by Food & Wine and Eater National. In France, the winemaking is handled by Julien Braud, who’s known for working with organic wine.