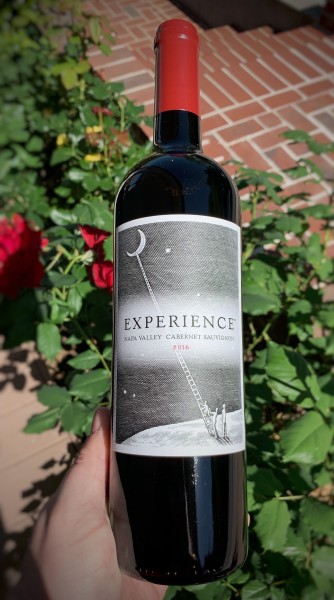 “…it has the same pedigree (winemaker & fruit), flavor profile, balance, acidity and finish, one comes to expect of a $75/bottle, but for a fraction of the price!”

While shopping last week for a SUB-$40 RETAIL Cab, we challenged some of our reps to bring in something new for us to try.   We had two requirements:  wine had to be Cabernet Sauvignon and under $40/bottle retail.  As you know, prices have crept up over the years and “VALUES” are increasingly harder to find.  Several wines were presented, tasted, considered, but one Cabernet Sauvignon “EXPERIENCE,” just topped them all!  WHY?!?  PLEASE REVERT BACK TO FIRST PARAGRAPH ABOVE!!!

This NEW RELEASE (we are first to have it) is truly a MUST BUY for those seeking a VALUE “NAPA VALLEY” CABERNET SAUVIGNON.  Last year’s vintage (2015) received 90 Points from Robert Parker’s “THE WINE ADVOCATE.” They summed it best saying the wine is: “plush, generously fruited, harmonious and refreshing, it is simply delicious!”

Even though this bottling hasn’t been rated…it has the same pedigree (winemaker & fruit), flavor profile, balance, acidity and finish, as one comes to expect of a $75/bottle, but for a fraction of the price!  Do yourself a favor and lockdown a six-pack of “Experience” today!  Once the reviews come out, its going to be gone!!!

***Quick backstory – In 2001, owners Catherine and Travis Vale, met by chance while both travelling (separately) through New Zealand.  Travis was furthering his education in Marlborough & Catherine was finishing up a six-month tour of Southeast Asia and Australia. They ended up riding together on a tour bus was aptly named “Experience.”  The pair seemed destined to launch their own project and launched “Experience” in 2010.  They produce three delicious wines including; Pinot Noir, Cabernet Sauvignon & a Zinfandel-based blend.

Tasting Notes:  “Classic Cabernet Sauvignon aromas of blackberry. cassis, blackcurrant, and dried violets shine with cocoa, toasted coconut, vanillaand baking spices in a supporting role. On the palate, the wine is rich and nicely balanced with a silky mouthfeel and soft tannins. and flavors of sweet blackberry, black pepper, and aromatic cedar. A lingering, spicy finish with flavors of blackberry, blueberry and cassis round out the wine.”