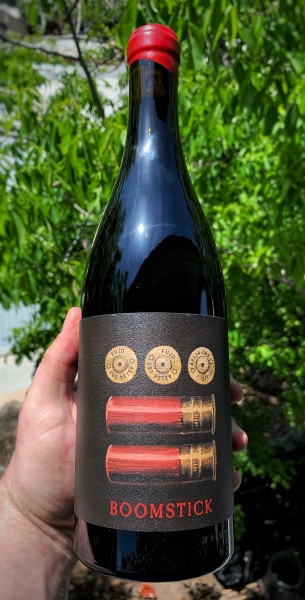 Only 42 Cases Produced.  ONLY 5 CASES

BOOMSTICK!  This over-the-top Grenache is produced by Chris Kiranbay under his label SAINT K WINES (but, also assistant winemaker at Herman Story Wines) and…well…is ABSOLUTELY DELICIOUS!  The name BOOMSTICK (more on that later) is a true expression of the juice inside which is not for the faint of heart.  At first taste, only one word that comes to mind…CHOCOLATE.  Truly, it’s like one of those shotgun shells from the label was just fired and is emanating a cloud of chocolate smoke in your glass.  With overtones of juicy bing cherries, luscious mouthfeel and a 15 second finish you will quickly dust off this entire bottle.  Problem is…there were only TWO BARRELS or 42 cases available and we have FIVE in STOCK TODAY.

When we tasted this wine we just looked at each other and said, “OOH…THAT’S FUN!”  It truly is a party for your palate and is the PERFECT summertime red wine for BBQ’s and gatherings.  Though we say it’s a fantastic bottle to share, be selfish and keep this one, or SIX to yourself!  Can’t believe we are doing this, but YES, we are offering a sweet discount of 15% off when you purchase a solid 6pk (while supply lasts)!

Tasting Notes:  “Boomstick was made from a measly half ton of fruit from Russell P From’s vineyard on York Mountain.  50% New French Oak on this one and a long maceration period.  It’s not for the somms.  Unless they’re cool (and CV IS COOL).  The Grenache it’s made from no longer exists as it was grafted over to Sauvignon Blanc for Vailia after this vintage.  I meant for this to release last fall but it was tasting all angular etc. and patience has paid off.  Two barrels gave me only 42 cases so there is a 5 case limit on this one.”

This guy is legit, and you must appreciate his brutal honesty!  We are taking the easy way out on his bio, because frankly we can’t do any better!  BIO “No one has ever said that I’m a saint. Let’s just say I’ve got a bit of life experience. I learned about holiness from my childhood in the Middle East. I learned about selfless dedication from some former coworkers who shall remain nameless. I learned about benevolence from ex-girlfriends. And I learned about virtue from …well, no one, actually. Virtue eludes me.

I was deeply involved in the restaurant industry in Washington, D.C., when I took a trip to Napa in 2006. I decided that I had to move to California, so I worked a harvest and then finally got to Paso Robles in 2010. I worked in fine dining, and started a wine brokerage. I had found my people. After settling in at Herman Story Wines in 2013, I started making a little of my own wine.

The name Saint K is a nod to my proclivity to earn a reputation. The label is a little freaky, it reflects my love for post-apocalyptic/urban-decay scenes and my sly regard for certain landlords I’ve known. My skin-contact Grenache Blanc and a Mourvedre echo the inner-city elegance I know so well.

No one ever said that I’m a saint … I might as well own it.” -Chris Kiranbay

If you remember from above, Chris likes the “post-apocalyptic/urban-decay scenes” in horror movies.  So we found it pretty comical that while looking up “BOOMSTICK” on google, we found this link that took us to URBAN DICTIONARY which says, “One of the trademark weapons of the movie series ‘Evil Dead.’  It is a twelve-gauge double barrel Remington with a walnut stock, cobalt steel barrel, and hair trigger.  We than googled “EVIL DEAD” and found the first scene of this 1981 horror flick (which did get 95% on Rotten Tomatoes) on “youtube.”  You can watch that by clicking here.  DON’T JUDGE US!