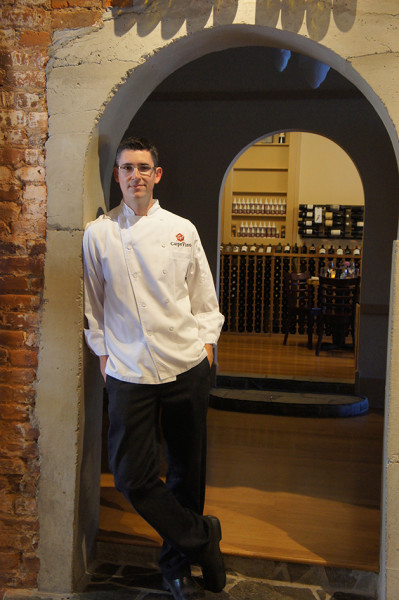 Today, we announce that Chef Eric Alexander will be leaving Carpe Vino, at the end of this week.  From his opening (along with now wife Courtney McDonald) of Carpe Vino’s restaurant in 2006, Chef Alexander embarked on a culinary journey that would remain relevant for his entire 14-year tenure.  Even though Chef’s cooking style would be categorized as “California-themed with French influence (or farm-to-table), he continually broke from his comfort zone.  It’s safe to say he constructed over 100+ custom menus, never doing the same dish twice!

The dining experience of Carpe Vino continued to grow over the years and the notoriety came along too!  Here is a just a short list of some of the achievements that were achieved to date:

Even though her visibility within the restaurant has been limited over the past couple of years (primarily preparing pastries in the morning), we would be remiss to not thank Courtney McDonald for 14 years of service at Carpe Vino!  Courtney’s responsibilities over the years were ever changing, from Executive Chef, Pastry Chef, server, florist, and farmer for the restaurant!

Fourteen years is an anomaly for a Chef’s tenure at any restaurant, in any city.  The opportunity has come for Chef and his family to pursue a new chapter, together, here in the Auburn-area.

Chef, we truly appreciate the years of dedication to your craft, your staff, the customers at Carpe Vino and from all of us, we wish you and your family the best on your future endeavor. 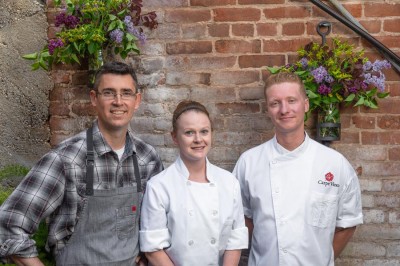 Even though Chef Alexander is exiting, we are in the wonderful position of promoting two of his proteges, Tim Dube and Olivia Poulos as Co-Executive Chefs for Carpe Vino.  These two talents have been tucked away in the galley of Carpe Vino for FOUR+ years each.  Over that span, it’s safe-to-say they have had plenty of experience in the CV kitchen, absorbing all the knowledge from Chef Alexander whenever possible.

Both Chef Dube and Chef Poulos will share all the responsibilities of running Carpe Vino’s back-of-the house!  Chef Poulos, a graduate of the Culinary Institute of America, spent her first years out of culinary school in Napa, working both at Press in St. Helena and Michelin Star rated REDD in Yountville.  Chef Poulos joined the Carpe Vino team in the spring 2014.

Chef Tim Dube, a culinary prodigy in the making, began his career at the age of sixteen at Fins Market in Grill, working at both locations in Rocklin & Orangevale.  His culinary journey would continue to Chef’s Table in Rocklin, Mulvaney’s B&L in Sacramento, before finally landing at Carpe Vino!  Chef Dube also joined the Carpe Vino team in the winter of 2014.

Fact is, these two talented and aspiring Chefs have been preparing many of the dishes for Carpe Vino’s menu over the past 4+ years.  We look forward, just like we did with Chef Alexander, to them bringing their personal influences on the Carpe Vino menu.  Several of the recently added dishes on the current dining menu were conceptualized by Chef Dube over the past couple weeks.