These days at Carpe Vino, I am very content to do what I am told (mostly), so when Drew shoved a bottle of the 2010 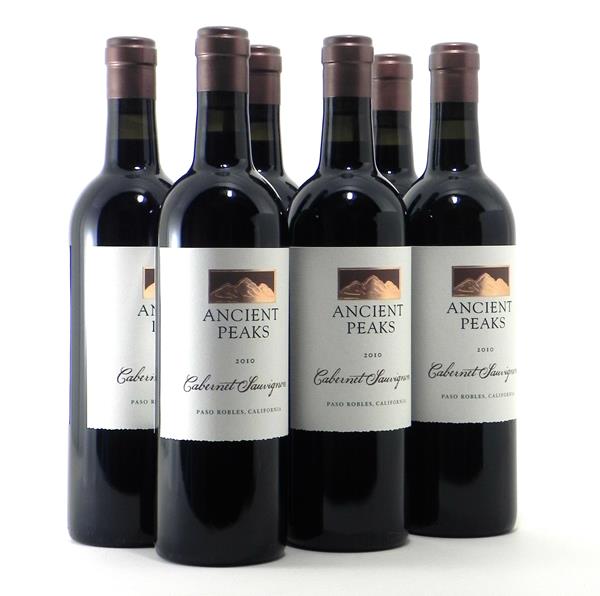 Ancient Peaks Cabernet Sauvignon at me and said “See if this would make a good Gary’s Deal,” I said “Sure.”

Without even tasting it, I sensed it was a slam-dunk because we have a great track record with this Paso Robles-based winery.  When Drew said we could offer it at $11.99 on six bottles, $5 off the winery price of $17 (a 29% savings), it seemed to be a no-brainer.  The last wine we sold from Ancient Peaks was their Zinfandel, and the stuff simply flew outta here.

I had a bit of flashback when I uncorked the bottle.  Last February I went on a nearly two-week So-Cal swing pulling my 15-foot, 1958 DeVille trailer, and I spent much of the time in Paso.  Heading up the 101, I made it a point to stop in Santa Margarita to visit the Ancient Peaks tasting room.

The town is really sleepy and the modest commercial activity is centered exclusively on El Camino Real.  It was late when I pulled in, and I was starving.  Fortunately, a diner was open and I remember ordering a Monte Cristo sandwich.  I was the only person in the joint, and the fries were cold. . .an unremarkable experience.

Just down the street, the Ancient Peaks tasting room was something else entirely.  Small space but nicely done.  The staff was very knowledgeable, as was the other person tasting. . .an Ancient Peaks wine club member who was as ardent an evangelist as any of our 900 clubbers in Auburn.  I didn’t visit the estate, but it’s out there somewhere in the wilderness beyond Santa Margarita.

I shared the bottle with my beloved Ellen at her house, paired with two of the best filet mignon we have ever had—sourced from our very own Longhorn butcher shop on the north side of Auburn.  I nailed the steaks at a tick past MR; anything beyond that would have been a disaster.

The Ancient Peaks Cab was a righteous sidekick to this world-class steak.  Okay. . .it’s no substitute for a Mount Veeder Cab or a killer bottle from Howell Mountain, but listen to G$, it packs a helluva punch for under 12 bucks.  We’ve got ONLY 20 cases, kids, so first-come, first-served.

Winery Tasting Notes:  The 2010 Cabernet Sauvignon offers warm aromas of dusty black cherry and plum with hints of cocoa and anise. Dense, layered flavors of black currant and blackberry are accented by notes of vanilla, tobacco and spice. Plush tannins glide into a lengthy, luscious finish.

Thanks to our flood last Monday, the cash registers have been silent at the Friendly Confines.  Now that the water has stopped flowing, slosh over to the “Buy Now” button and do your part to jump start cash flow.  Stop in for a slurp and I know you’ll take six home.