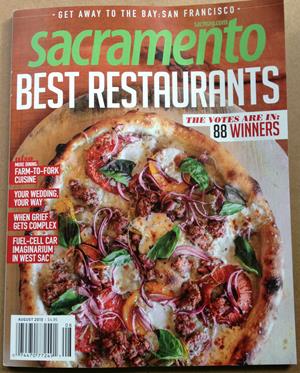 If you’ve followed this newsletter over the last decade, you will hear me bitch from time-to-time about how difficult it is for Carpe Vino to get on the radar of Sacramento media.  Taste restaurant in Plymouth suffers a similar dilemma. . .it operates at a very high level, but because it is outside of the Sacramento sphere, like us, it is often overlooked in favor of lesser, Midtown Sacramento joints.

If I sound like I’m whining. . .well, a case could be made for that, I suppose.  What bugs me is that is that our stellar staff—from the chef, to the kitchen crew to the front-of-the-house service team—seldom get the recognition that they rate. . .IMHO.

Happily, that is changing with a burst of media interest over the past couple of months.  In its current July/August issue, Chef Alexander and his use of local famers was the object of a full-page feature in Sactown Magazine.  In the August issue of Sacramento Magazine, Carpe Vino was named the top restaurant in Auburn, and it was profiled with six other restaurants in a piece titled, “Fresh Choice.” 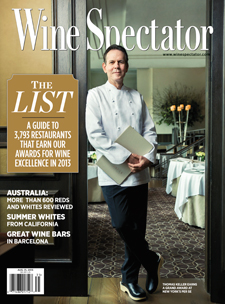 What’s really exciting is Drew’s photo appeared in Wine Spectator’s August 31 edition (the current issue on newsstands now) alongside our listing among 3,800 restaurants worldwide that received the magazine’s Award of Excellence award (or others) for their wine lists.

And when the September issue of Granite Bay Style magazine is published, yours truly will be featured in a Q&A feature with photos.  Nice.

Now should I be worry about the restaurant being over-exposed?  Not!

See you in the Wine Bar,